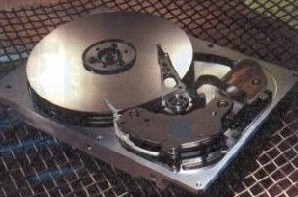 The hard disk (HD for short) is the main component of a computer backup. During the first year hardware, we see that the type IDE and SATA hard disks. SCSI controllers and hard disks will be seen in the second year. MFM and RLL usable only with the 8088 types are also past obsolete. IDE hard drives are used since the 80286 processor-based computers, even if the standard has since been improved several times.

Hard disk integrates an internal controller connected to the motherboard by 40 ou 80 pins (PATA) controller or an 8-pin (SATA) cable, they must be of the same type with ascending compatibility. With IDE controller, you can install 2 disks called master and slave via the water. The master configuration / slave is done by jumpers on each disk (or player / CD and DVD burner). For the Serial ATA, a single hard drive controller and no bridging.

The components of a hard disk:

Average access time refers to the average time that the head moves from one point to another on the same stage. If the hard drives of 1996 go around 13 ms, current standards arrive less than 8 ms.

Each platter is divided into tracks of varying size depending on its location on the disk, most smaller towards the center by formatting low-level in the manufacture. Each track is then divided in sectors of fixed size (usually 512 bytes).

And finally, high level (for example, the Format command) formatting creates clusters in the areas of variable size depending on the partition type and the capacity of the hard disk. The boot sector is the one used to start the operating system.

Capacity size of a disk hard is calculated by the formula:

Before you store information, a hard disk must be prepared. They are first format low-level in the manufacture (a program is downloadable on the sites of different manufacturers (specific for each) and in some cases repair bad sectors). The DOS FDISK command to partition the hard disk, this command is directly integrated into the installer under 2000 XP, Vista... Then comes the formatting.

The FAT is a type of partition with NTFS. It includes a table of contents that includes cluster by cluster the content. It is in version 16 from DOS 4.0 (early 1990s) and FAT12 for DOS 3.3 and below.

The FAT 16 used DOS allows 2 GB max (main and logical) partitions. The capacity of each sector varies according to the size of the partition. The VFAT (for Virtual FAT) version used from Windows 95 so not DOS accepts long filenames and exceeds the limit of 8 characters, being compatible with the standard FAT16.

An NTFS partition is more based on clusters depending on the size of the partition but a master file table that is based on a description of files (location, attributes, user space quota for the users access rights,...) and allows best protections of the files the user access level. The size of the sectors is also fixed: 4 KB for them were leaving 2000 and XP (limited to 2 terabytes in theory and Tera-byte 256 for 2003).

Since AT 80286-based computers, hard disks are IDE (also said PATA to Parallel ATA). These PC used a separate controller inserted in slot ISA with a transfer rate of 4.7 MB/s maximum.

The IDE standard able to connect 2 drives (a master and a slave) on the same controller using a 40-wire to three connectors cable. The maximum capacity is limited to 540 MB (so no CD-ROM drive).

E-IDE is used since the 486DX-4 (some Pentium I were still with the previous standard). It exceeds the limit of the 540 MB of standard IDE to a maximum capacity of 8.4 GB. Disks hard superiors are sometimes detected by the BIOS (depending on the motherboard), but the formatting (or the FDISK command) limit the ability. The following developments will remove this limitation. Players and recorders CD-ROM are accepted

These discs allow a transfer speed of 10 MB/s maximum. Greater than 540 MB capacities are usable only by setting the disk in the BIOS LBA (logical Block Addressing) mode.

With the E-IDE and following standards, four devices are accepted via two controllers: one main, primary (primary) and secondary (secondary). Each accepts a master (master) drive and a slave (slave). Setting up disks in masters or slaves uses jumpers on the back of the hard disk / drive / CD-DVD burner. On the other hand, the primary port is generally faster. For example, the UDMA 100-133 controller is generally accessible only on primary, secondary is restricted to 66 (or 33). Some hard drives of new generation are connectable on the primary.

PIO mode dates back to the first Pentium. It is a form of control for sending signals / data reception. Allowing speeds important (for that time), it does not use DMA mode, involving much more CPU than the following standards. Each disk accepts a PIO (Programmed Input / Output) specific, compatible with lower versions but with loss of performance. The easiest is to use automatic detection of the BIOS which detects the highest fashion possible.

If the PIO modes allow for good performance, they do not use the Direct Memory Access (DMA), it is the processor that does finally all the work of data transfer. Appeared with the Pentium II, standard UDMA-33 can load information at the speed of 33 MB/s mode block (with data) without using the CPU. It uses the up and down flanks of a clock 8 MHz on 16-bit.

The following standard of 1999 and is identical to the UDMA-33 but double the rate of transfer to 66 MB/s (UDMA-66) a frequency of 16 MHz (double the ATA-33) always 16 bits wide. This standard uses a new sheet 80-wire (but always the same connector) by adding neutral wires to block the interferences between different signals.

These hard drives are recognized by the UDMA-33 controllers with a low speed of 33 MB/s. A UDMA-66 controller also supports UDMA-33 devices.

8. Summary of the IDE modes.

The IDE uses a 16-bit data bus, 2 bytes (octets) are transferred each time.

Can you put any IDE drive into a PC? Not quite. Bios limit type of controllers and according to its date, limit the maximum size of usable drives. The table lists the alternative limitations based on the approximate dates and causes.

Setting up a hard drive in master - slave is done by a jumper (jumper) rearward. The choice is often:

For older drives hard Western digital, as a single, bridging must often be put in the other direction by shorting pins master and slaves). It is better to use the new master for performance reasons but you need to reinstall Windows or use a program such as Symantec's Ghost cloning.

Locate the primary IDE connector (usually in blue) or secondary (usually in black) on the motherboard. Each controller accepts 2 hard drives (or DVD CD-ROM, engraver,...). On each controller, a disk can be single (master or single), master (with a second drive as slave) or slave. The primary hard drive (where the operating system is installed) must be connected to the Master on the primary controller for the old OS.

Start the computer. For the old BIOS, should be an auto detection (or even older ones return parameters manually). Currently, the parameters of hard disks are auto-detected directly at startup.

In case of problems of detection or if the computer does not start with the new configuration, check the IDE cable connection (properly pressed, meaning), especially if the PC does not start with the led in front front of the box corresponding to the hard drive that remains lit. Also check the bypass of each master device - Slavic, two masters on the same controller block star

Serial ATA is a new type of controller. The internal design of the disc is identical to that of the previous PATA, only the method of data transfer changed in serial mode. Parallel connections are not the rates very high, this is related to every bit of data synchronization, but also problems of form of signals when the speed increases, it is more perfectly square. Readers / DVD recorders also use this interface.

Serial ATA type date may 2001, but the first devices are on the market since the second quarter of 2003. Evolution of the SATA in 2005, the S-ATA 2 double in theory the maximum transfer rate: from 150 to 300 MB/s. Both versions are compatible between them, a SATA controller accepts hard drives SATA-2 and reverse. In 2009, for the third SATA3 version, the maximum theoretical throughput passes at 600 MB/s (required to manage the last SSD hard drives). The cables are the same and the mixture of controller - disks of different versions is possible with losses of flow.

The interface is no longer a slick but a 7 wire cable (1 signal to send and 1 receiving signal coupled to a differential signal and 3 ground). Each controller is dedicated to a single disc, then in the old standard, two devices divides the connector, reducing performance during the simultaneous use of both. There's more jumpers to configure as master / slave since the disc is single. The cable length is limited to 1 meter (45 cm to an ATA-133).

Serial ATA drives are now hot plug and can be connected (or disconnected) with the PC turned on from Windows 2000.

Found in trade of adapters to pass an a ATA controller to S-ATA controller. This solution however limited the speed to 133 MB/sec (ATA-133). Conversely, adapters to connect parallel hard drives on a serial controller. Controllers S-ATA boards on PCI bus are also used to connect a SATA in a computer without controller of this type, but of new, limited by the PCI bus with 133 Mb/s.

As SCSI hard disks, the SATA include control errors during transfers by using the differential signal (inverting). This is the same in the network RJ-45 copper hand connections, the faster SCSI standard allows speeds of up to 320 MB/s but directly between devices connected on the cable in DMA mode.

Two or four S-ATA controllers are available on motherboards, as well as a controller ATA (two for older motherboards). Generally, the chipset accepts the modes RAID 0 and 1.

The SATA is not natively recognized by the Windows installation in the majority of cases, mainly for the old controllers. A floppy disk must be created in advance using the motherboard installation CD. At the beginning of the installation, you must press the F6 key to install additional driver, insert the disk when requested by the program and select your operating system (2000, XP, 2003, Vista). Another solution is to check the configuration of the SATA controller in the BIOS and set up ATA.

These discs are interfaced in SATA (2 or 3), but the big difference between the types seen above is linked to storage technology. Over shelf magnetic, or engine because the SSD keeps the information using Flash memory (like the memories of digital cameras). This has benefits for consumption, resistance to shocks,... but also significantly lower access times (between 0.4 and 0.7 ms or 20 times less than a classical album) despite higher transfer speeds than conventional hard drives. Performance are in the order of two times higher in general but largely clamped by the 300 MB per second transfer rate very theoretical.

They are mainly used in the Netbook (for autonomy) but start to integrate into (consumption and transfer speed) network servers. Their current prices does not use them in standard computers and notebook, even if prices fall. Small problems still, these flash memories have a limited number of entries depending on the technology used: 10,000 to 100,000 (also this is theoretical) and in practice seems too pose problems, but to take into account for some applications, even though as in the SMART standard disk technique, the controller also manages the defective parts.