We know now what characterizes a computer PC: microprocessor, chipset, internal bus, memory, ports... Remain to assemble these components in a "box". This part is addressed only for desktop PC. The professional servers use duplicated switching power supply, hot plug, which will be seen in the course of second in specificities servers and following.

The whole of the PC components is connected on a motherboard which accepts, via specific connectors, bus and ports (in the new models), the processor, the memory, the graphic card, network... The first characteristic of a motherboard is the power supply type: AT (old generation) or ATX (new generation).

A motherboard is a thin rigid board , generally green / amber mylar, consisted of several laminated layers. Circuits of connection as a preliminary were printed on each layer (multi-layer). The circuits of connection (tracks) connect the electronic circuits and connectors between-them according to an electronic diagram defined as a preliminary. Some circuits are welded by legs through the board, others are directly welded onto the board. These last circuits are of type SMD. Because of the complexity of the basic diagrams, the difficulty in finding the components specific to the board and the material necessary to weld components SMD (they are stuck on the board then the whole passed in a bath), it is impossible "to repair" a motherboard. In the event of problem, the only solution is to change it. For recall, the motherboard must be fixed via out of metal or plastic measuring apparatuses inside the case.

The mechanical standards of fixings often pose some problems. The assembled PC systematically use standardized fixings. marks  use boards owners (specific to the mark) and can be replaced only by boards of the same mark and even often of the same model. Approximately, if a computer of mark breaks down, you can either throw it, or to pay the asking price by the manufacturer.

One characterizes the cases according to the size.

The shape and the color of the faces fronts depend on the manufacturer and generally do not intervene size. Be wary nevertheless some marks of PC such as Compaq or Packard Bell which use specific internal fixings to add an engraver or other. 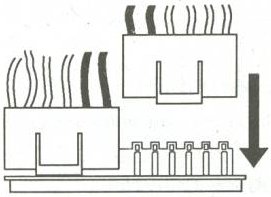 The first XT used their own switching power supply. If the form and fixings changed in the 286 of clones type, the voltage present on the connectors remained the same ones. This power supply PC (include in the cases) is called of type AT. For connection on the motherboard, the black wire of each connectors (ground) must be in the medium.

Stitching of a power supply AT

The connector 230 V passes directly from the external electrical connector towards the switch (generally opposite before). It returns towards the power supply then. To arrange on the switch requires TO WITHDRAW the ELECTRICAL CONNECTOR.

The wire Black (black) and White (white) come from the electrical supply network (while passing directly through the power supply) then set out again with the power supply by the wire brown (brown) and blue (blue). These colors can change from one power supply to another, the colors are more the share of time printed on power supply AT.

The advantage of the ATX, the PC are cut all alone (under Windows 95/98 and Windows 2000) and can start again directly by a signal modem for example.

Certain motherboards during the transitional period (1998 - 1999) had them 2 modes of connections.

The first provides an electric power of + 12 V. on a connector of 4 pines

This power supply is referred under standard ATX 2.03, so called ATX12V. Pentium IV requires minimum a power supply of 300 W which can provide 20 A out of the +5 and 720ma on the +5SVB. With current configurations, Pentium IV functions without the auxiliary connectors of power supply, but prevention is better than cure. 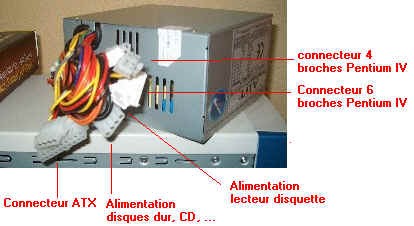 21.3.4. Other characteristics of the power supply.

One finds other characteristics of power supply AT and ATX:

Power. If first 486 used power supply 120 W, the standard was rather 200 W It of 300 W is advised for Pentium IV. The more you insert peripherals in a OC, the more the power supply must be powerful. In the case of 4 hard disks, the power supply owes minimum being of 350 W.

Format XT dates from computers 8088 and 8086. As little among you will meet some with share in one museum, I pass. This format is specific to these cases (just as fixings power supply). In any event, All the components are specific to these machines: hard disks and controllers, graphic accelerators ... In the event of breakdown, you can nothing make, even not recover the data of the disc via another PC. Moreover, these machines generally use DOS 3.0 or 3.3 whose FAT is not readable by higher DOS and inevitably Windows.

With the introduction of the 286 in version assembler, the manufacturers of motherboards standardized mechanical fixings of these boards. This makes it possible to insert any motherboard AT in a case of the type AT.

The connector was completely re-examined. This affects the specifications of the voltage regulators, now integrated in the power supply, whereas the circuits and their coolers were formerly integrated on the motherboard. So the manufacture of a motherboard is less expensive. These boards remain under tension when the PC is extinct. A simple signal via a switch starts again the motherboard.

This format of motherboard was used by Western DIGITAL in 1987. Specificities never were really published. Compaq and Packard Bell were the first users. The slots of extension are not fixed on the board as in formats AT and ATX, but using a board fixed perpendicularly at the motherboard. This explains why the cases using this format are often low height. Currently, with share for certain special machines (think of the server "in rack"), this format is not used any more.

Launched in 1997, this format of motherboard is based on the LPX. It integrates identical mechanical characteristics, with 2 distinct boards. The first integrates the processor, the memory hiding place and the read-write memory as well as the integrated ports. The board girl integrates the slots extension. At the time of the disassembling of the case, only the principal board is withdrawn, the board girl remaining in place. Current technologies all are integrated on these boards, AGP, USB

21.5. The parameter setting of the motherboards.

Goatskin bottles the mechanical characteristics and power supply AT, ATX, the motherboards include particular characteristics which make it possible to insert the "accepted" processors, memories, expander cards... It  will determine if a motherboard accepts or not the characteristics considered. Us here with the practice in electronics hardware course. In the following chapter, we will see the parameter setting of each model of motherboard for PC.

As we saw, the motherboard must answer certain requirements:

1. the family of processor (286, 386, 486, Pentium (MMX), Pentium II...): socket of insertion, external speed and intern (clock, multiplier) and supply voltage (with possibly the slot processor). The chipset also forms part of this category.

3. type of hard disks controller (PIO, UDMA...) under sorrow that the hard disk is not detected, or which its capacity is false.

5. The BIOS: on the old machines, the BIOS was recorded on ROM'S or Eproms, which prevents very updated. Bios is often limited for a certain number of processors (speed for example) or does not recognize certain functions.

Notice that certain specificities are directly determined by the chipset as we already saw.

The parameter setting of the motherboards passes by specificities of the processor (speed external, multiplying, supply voltage, standard possibly for Dual the tension), power supply of Dimm, cuts L2 mask in certain cases and some specificities related on the motherboard or the buses.

The bios consists of 2 different components. A program firmware which manages the motherboard (the BIOS itself) and a memory safeguarded by battery for the parameters of the SETUP.

By the first chapters treating of the microprocessor-based systems, we saw that when a microprocessor-based system starts, the processor reads a starting program located at a fixed address (which differs according to the type of processor). This program makes it possible to parameterize the various peripherals. In our case, program BIOS starts the graphic card, tests the presence of the keyboard, of the hard disks...

If the BIOS is the program, the motherboards include a memory makes it possible to safeguard the parameters which you choose by the SETUP. In the event of problem, it y on each motherboard a bridging to modify which reinitialize default settings. The memory is safeguarded by a pile (an accumulator for 486 and the lower). If the pile is bad, the machine seeks disk drives 5"1/4, and not of the disks hard for 486 and lower, takes again the parameter settings by defect for Pentium and superiors (detection of automatic hard disks). In all the cases, the clock is not safeguarded any more and it date is thus false (this pile is also used by the RTC - Real Time Clock- when the PC is extinct).

If until the first PENTIUM, you could meet the BIOS of mark Award and AMI (Phoenix)

With technology, the BIOS evolve/move and are adapted to the various processors. Some BIOS accepts the mice even directly. We will see the BIOS - setup in a later chapter some models of BIOS according to the evolution: 486, Pentium, Pentium II... for each motherboard.

Competences with the service of quality.