In chapter 5, the processors were analyzed by type (family, manufacturers). This chapter will explain the internal architecture of these processors. To know the internal structure of each processor in detail would be complicated too much, but this will make it possible to clarify these differences in performances of the processors for an equivalent speed.

All "processors PC" use the same instructions as first 8086 CPU of INTEL (but often the operating system is not compatible any more with these old programs). The instructions which a processor is able to read are programmed out of assembler language. All the operating systems and programs are re-coded starting from advanced languages (C, Pascal, Visual BASIC...) towards this assembler. If a new processor uses the same basic instructions as a processor of the first generation, this is not restrictive. In the course of evolution, some instructions were added to allow addresses decoding on a higher beach (386) or for multi-media instructions (Pentium MMX, Pentium III, K6-2 and K6-3).

1. Internal structure of a basic processor

Let us take again our Z80 and distinguish the various parts: with the top, an internal bus of data, below an internal bus order and a bus interns of address. Knowing the diagram of the microprocessor-based systems, this is not astonishing. In the part of right-hand side, an UAL (Arithmetic Logic Unit).  This UAL is a calculating unit, it is connected to a noted buffer memory the accumulator and through bus to a whole of memory called registers. In our case, these registers are noted B,C, D... The registers A', B', It... is specific to Z80, but also exists in the 8088. This makes it possible to work with two zones memories which one makes rock. The UAL of left makes it possible to make calculations on addresses. Notice the small incrementor +1 who allows to increase the pointer programs (the address where the next instruction of the program is). 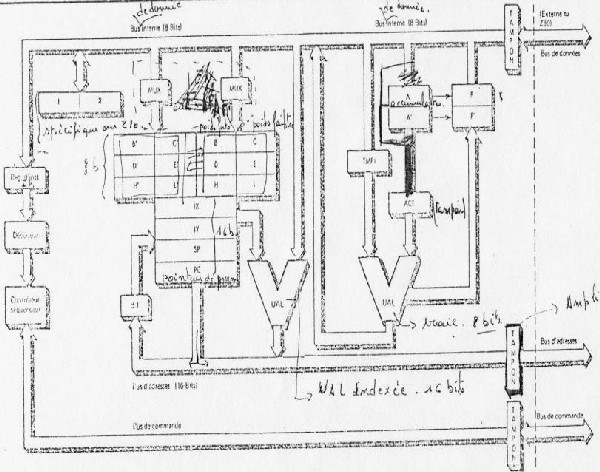 The diagram of the processors of this generation showed the following diagram:

This structure charges an instruction code at the same time, that is to say for an instruction of the type LDA XX XX (loading in the accumulator of the data contained with the address memory XX XX), three cycles of instructions (for LDA and 2 for the address). This condition moreover is met only if the processor charges an instruction by cycle of clock, but it is the case in a system INTEL. As the instructions of the processor current are compatible with the 8088, the sizes of the registers are it too. It is thus impossible to increase the size of these memories to increase the speed of execution.

Which are the possibilities of increasing the speed of a processor without modifying the structure?

All these tricks are currently used, as well by INTEL, as by AMD and Cyrix (VIA).

2. Use of a cache memory

According to type of processor, the L2 cache is managed differently. In the case of Pentium Pro and Pentium II, the L1 cache is not any more out of direct plug between the memory and the processor, but directly to manage by the processor. The cache is established in the same case for these processors.

By way of example, a CELERON 300 without L2 cache is 40 % lower in performance with Pentium II of the same frequency and of identical structure.

Moreover, the current processors use 2 internal L1 caches: for the data, for the instructions. More the cache size increases, more the difficulties of managing this cache memory increase, but more speed increases.

3. Passage of CISC to RISC

Another solution to increase the performances is to make pass the structure of the instruction of the CISC (instruction 8088) in RISC. Each firm uses in-house its own instructions, better is this transfer, better are the performances. This explains why the effective speed of a processor is not identical for 2 of the same processors frequency, but of different structure.

. far too many different instruction codes.

. cut instructions high and variable (1 to 15 bytes - bytes by instruction)
. structure of the not standardized instructions: complex, not very powerful execution

Clear separation enters the instructions of access report and the others

Standardized instructions, in the face and execution time

Very many registers with General uses

One or more internal(s) cache (s) as well as internal plugs and an instruction set reduced to the simple instructions.

Each modern processor will seek packets of X86 instruction, decodes them on several lines of 8 bits to make them pass in instructions RISC. This poses problems at the time of conditional instructions. How the processor can charge several instructions and carry out them according to the choice not envisaged at the beginning? Each originator uses either a circuit of prediction located upstream of circuit of decoding CISC - RISC (case of INTEL), or a table of connection which memorizes the last connections (AMD). As the instructions are charged a long time in advance, it may be very well that the data are changed...

The passage of processors RISC to processors CISC brought other internal changes, we will review them.

In superpipeline architecture, instruction execution is now divided by 6. The number of simultaneous execution is hardly higher in super pipeline compared to an architecture pipeline in the instruction usual. On the other hand, as of time used by each part of instruction is weaker, each time that a part is omitted (because not necessary) the execution is even faster for the following one.

Super pipeline: the processor does not treat the instructions of only one blow, but in 6 stages: pre extraction, decoding of instruction (2), execution, generation of address and differed writing (case of a loading towards or of the memory).

superpipeline structure: the M1 processor of CYRIX, architecture go up to 7 levels.

In the internal structure of processors super scalars, the processor includes several units of execution of instruction which work at the same time. Athlon is super pipeline and super scalar.

If since Pentium MMX, one passed to power Bi-voltages, the supply voltage also decreases since that of K6-3 to 450 MHz is currently of 2.2 V Attention, systematically check the tension on the processor and not on the motherboard or in the technical notes of this one. For the processors Bi-tensions, to take V Core , even if the second tension is posted.

The modification of the tensions of the processors arrived with the first 486DX2 of Cyrix (but became general). All the former models used the 5V. A power error on a processor involves its destruction shortly.

While adding some with above advanced, one arrives for example at K5 2,5 times faster than one 486 of the same frequency. Briefly let us analyze some internal structures of processors. Let us start with K6-2 of AMD above. 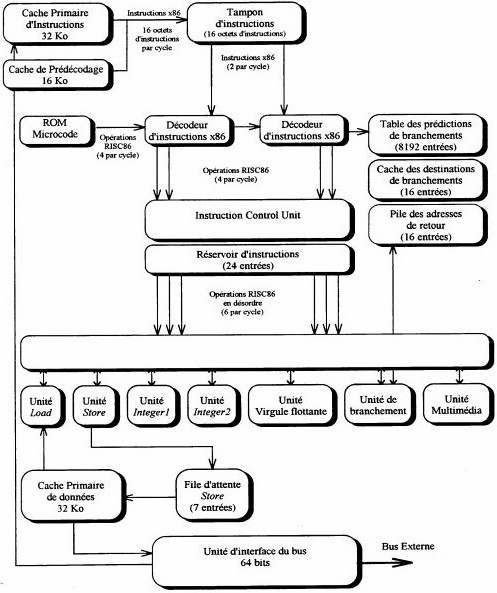 Diagram of general architecture of a AMD K5

In top on the left, the L1 instruction cache (the data cache is in bottom) by which forwards all the instructions coming from the memory (case of the AMD). The system below predecodage is used to check them the type of instructions which arrive (memories or execution) and is used for the predictions of connections. The whole is connected to a plug of instructions which sends 2 X86 instructions by cycle of clock towards 4 decoders of instructions (passage of the CISC with the RISC) This decoding is carried out by the Rom Microcodes. Instructions RISC are transferred towards a table from predilection from connections, associated another cache. Other share, the instructions are treated in RISC by the Control instruction Links which also sends the instructions starting from a tank of 24 orders RISC86 towards the various parts below: Load and Store (management memories), two units of entireties and one of floating point, a unit of connection which also manages the table of prediction and a multi-media unit related to instructions MMX. The whole is connected to the external data bus via the data cache and the Unit of interface Bus which also manages instructions cache. That of Pentium Pro below is identical, with share the external L2 cache which is not connected directly to the memory. This structure is included in Pentium II and Pentium III. 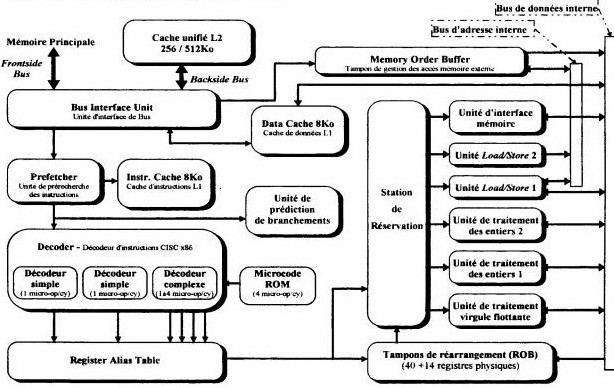 General architecture of a processor Pentium Pro (identical to Pentium II and III).

The modification of the internal structure of the processors returns the performances of a processor rather difficult to check while being based only on the frequency. This explains commercial do-it-yourself of Cyrix which systematically indicated speeds of its processors, not by effective speed, but by speeds of comparison compared to equivalents INTEL according to Brenchmarks (though). AMD with Athlons XP and Sempron makes in the same way. If the number of instructions decoded at the same time should further increase, the current direction of the processors goes towards the reduction in the size of the transistors, which leads to possibilities of increase in frequency. Indeed, more the number of transistors increases, more dissipation of heat is important. But the more the size of a transistor decreases, the less this dissipation is important. Other materials are in the course of use, IBM uses already internal drivers coppers some, whereas current technology is based on aluminum. Copper is better electric conductive (then less dissipations) but requires a higher technology, with difficulties of more important integration. This does not avoid in any event not the ventilator on the processor.

Competences with the service of quality in data processing.