We will enumerate the breakdowns according to not very correct assemblies and a multitude of incompatibilities. The breakdown service of a PC could start with here with a broad part of the indexed problems.

2.1. Parameter setting of the motherboard according to the processor: voltage, internal and external speed (FSB), mark

2.2. Installation of the processor in the socket (or the slot for Pentium II and some Pentium III and first Athlon) and of the ventilator.

Let us start by inserting the microprocessor on the motherboard. Then, let us position the ventilator above. 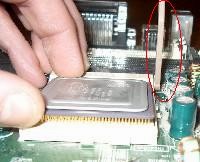 1. Check if no leg is folded, if not, rectify there with a small front grip.

2. Insertion of the processor in the socket by respecting the locating pins (lack 1 or 2 pine - leg on one of the corners). It is impossible to insert a processor in the bad direction without folding a pin.

3. Press on the processor to install.

4. By keeping the finger on the processor, lower the barring lever of the processor (surrounded in red on the photographs opposite).

For processors 486, Pentium, Pentium III and K6-2 or K6-3 pass as in point 6. The processors according to require a perfect cooling. Here how to mount a ventilator on a processor.

5. Use the thermal paste directly stuck on the ventilator or scrape this paste on the ventilator (with a flat screwdriver, it should not remain about it any more) and pose thermal paste (silicone) on the processor. The quantity to be put must just cover the unit with the pastille processor in a uniform way, the pastille should not be visible more but not need to put some more than 1 mm thickness. This solution is often preferable. 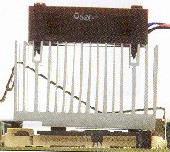 6. Position the ventilator on the processor while following the stages below.

A. Check the direction according to the 2 fixations on socket and cooler.

B. The ventilator must be posed vertically of a block. One should not pose the ventilator on a side and make lever to pose it other (because of the thermal paste).

C. The cpu fan should not pose on the plastic of the connector. For the old processors, this problem did not exist.

D. Fix the fastener without "catch" on the socket. Then, using a screwdriver (or better a key casing with the groin) being used as lever, fix the second part. Be quiet, if the fastener breaks, the use potential of the moterboard is ...

7. Insert the power supply connector of the vent

A first cause of breakdown if the PC does not start is an incorrect processor insertion in the socket, badly inserted. If the ventilator is not correctly in contact with the processor or if the ventilator under-is dimensioned, the microprocessor is likely to burn, irremediably destroyed. The current motherboards include a temperature sensor for the whole of the system and another for the processor. In the event of too important temperature, the PC is immediately cut. The maximum temperature is skeletal in the BIOS. Other motherboards do not start if the ventilator processor does not turn (in breakdown or connector CPUFAN not inserted). 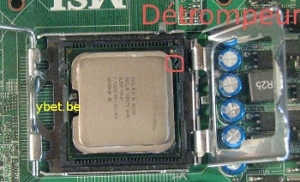 These processors use socket 775 and assimilate (1155,1156) but mothers map are not necessarily compatible with all models. In this case, the Pin are no longer on the integrated circuit (which just flat but good contacts in the socket. The processor must simply be placed in correct orientation before being locked.

A common cause of failure if the PC does not start is an insert incorrect processor in the socket, badly depressed or oxidation (to clean with a little denatured alcohol and let dry, then rub with a paper type paper towel to remove residues). If the fan is not properly in contact with the processor or the fan is undersized, the microprocessor may burn, irreparably damaged. Current boards include a probe temperature for the entire system and another for the processor. If the temperature is too high, the PC is immediately cut off. The maximum temperature is adjustable in the BIOS. Other motherboards do not start if the processor fan is running not (in failure or CPU FAN connector not inserted).

4. Memory insertion in the connector.

It is impossible to use a memory of a type in a connector different report (locating pin, dimension). By practice (and also because of certain problems on motherboards), one uses initially the slot 1, then the 2, then the 3

Fixings (here in white) must block the memory of each with dimensions perfectly.

The problem can come from the speed of the memories. If your memory is too fast, it will not be refreshed correctly (this problem is rather rare). On the other hand, if the memory is too slow for the motherboard (processor FSB), you lose speed and several difficulties can arise: not recognized memory, plantings...

A memory not recognized or recognized incorrectly (bad capacity) can come from various reasons:

In a modern motherboard, a parameter setting of the BIOS makes it possible to determine the speed of the memory automatically.

In the case of a motherboard including of the connectors report of various types, it is disadvised types mixing. According to the motherboard, you will be able for example to use Dimm 1 and Simm 1, but not Dimm 1 and 2 and Simm 1. All the cases of problem are possible.

Certain marks of memories are also incompatible with certain motherboards, even if this type of problem does not appear much any more with the new machines.

5. Fixing the motherboard and the peripheral boards.

The motherboard must be fixed on the bottom of the case separated by plastic spacers (cases AT) or metal (AT and ATX). Direct fixing on the case causes automatically short-circuit. (do not laugh, a customer did it to me). The number of spacer used must ensure the stability of the chart perfectly, that is to say 6 minimum.

The insertion of a peripheral chart (screen, network, its...) must be made cut off supply. In the case of a ATX power supply (for recall), the motherboard remains under tension if the PC is extinct. The electrical connector must be withdrawn before inserting or withdrawing an electronic chart. The charts must be perfectly inserted and fixed at the case. If it is not the case, the chart will not be detected, will cause plantings or even will short-circuit the motherboard.

In certain cases bottom-of-the-range, certain connectors are not usable because of incorrect size. A problem which one often encounters: the graphics accelerator is not correctly inserted in AGP connector.

For VLB board (486), with time, the motherboard subsides on the bottom and connector VLB is not correctly any more in contact. The only solution consists in slipping of the paperboard between the motherboard and the bottom of the case.

I already encountered some problem of compatibility between chipsets of graphics card and chipset of motherboards, mainly on the K-6 level of AMD. For the remainder, can pose problems of interruptions.

6. Fixing of the case connectors.

The switches, LED and speaker fit according to the motherboard (here ATX card). The direction of the connectors switch does not have importance, that of the LED, yes.

Respect the direction of connection. The 1 is often noted on the motherboard by an inscription (figure 1 or one point).

For the hard disks, there is also a mark on the connecting cable (often in red). The connector must be correctly inserted. The 1 (reference on the cable) is put in the connector hard disk of with dimensions of the power supply. The hard disks and readers CD-Rom (DVD/engraver) can be connected by 2 on each channel IDE (a primary channel and a secondary channel). On each channel, a peripheral must be as a Master and the other as a slave.

With the motherboards and ports UDMA 66/ 100/133, the cable uses 80 wire on the primary port, a cable 40 wire for the secondary peripherals. The position of the disc on the cable does not have importance in 40 wire and 80 wire. In 80 wire, the position is often noted for information on the cable. The primary port is often of blue color (white or black for the secondary). See also SATA connections

The starting hard disk must be in master like here. The readers CD/DVD/engraver fit on the secondary port of the motherboard. In many cases, the installation of the readers Cd on the primary port causes either nona recognition of the reader Cd or hard disk, or a deceleration of the hard disk which then works in UDMA 33 maximum (transfer of 33 MB/s instead of 100 - 133 MB/s). To insert an old hard disk as slave on the primary port combined with a new disc in UDMA 100/133 causes the same problems.

On the level of the positioning (master/ Slave) of CD/engraver/reader DVD. The former engravers must be positioned in master, if not, there are risks of losses of data. The reader of DVD must also be in master to avoid scintillations in the images. The position of the reader CD is indifferent. The new engravers include methods of correction of the type just Link and you can connect them as a slave (Slavic) if you use a reader DVD (him in master).

You also with some limits of capacities according to the size of the hard disk and the date of the BIOS. In this case, separate flasher the BIOS for the motherboards where it is possible (flashrom), the use of a hard disk of great capacity will be impossible.

These motherboards K6-2 and K6-3 of AMD always use the socket 321 contacts (identical to Pentium and Pentium MMX) call socket 7 but are definitely more advanced and with format ATX.

With format ATX, the connectors series and parallel, keyboard PS2 and mouse PS2 (sometimes the audio circuit) are established on the board. The ventilator processor feeds on the moterboard. The majority of these motherboards include temperature a sensor, even often 2: for the processor and for the whole of the case.

The board above (AOpen AX59 Pro) is not configured by bridgings, but by switch which one puts at 1 or to 0.

One finds of left on the right and upwards: 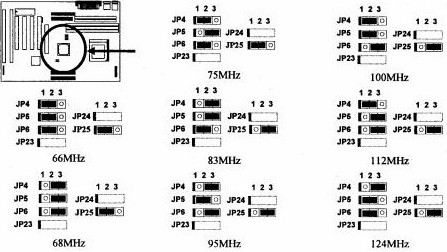 Select the external frequency of the processor, the Face Side Bus (FSB) above.

9. Duron and Athlon socket A motherboard. 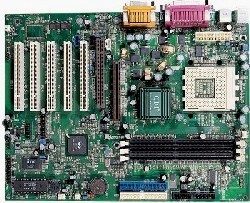 The basic installation of the motherboard does not pose problems:

Attention, the microprocessor FSB passes here from 133 MHz to 166 MHz. The board above does not accept them, it is necessary to use a KT400 of VIA like chipset (with normal place KT333)

In this case, you can also used the bridging of automatic control of V Core (supply voltage of the processor) or to manually put the tension (variable of 1,65V with 1,85V). Recall: overclocking can cause the destruction of the processor.

8. Jumper of protection BIOS the flashage of the BIOS is protected by defect in the SETUP but you can moreover put specific bridging on the motherboard.

9. Enable or disable the integrated sound board, is done here using 3 bridging.

10. In addition to 2 USB ports integrated into the back of the motherboard, you can connect 2 additional ports on the front face of the case.

Competences with the service of quality.