In microprocessors based systems, we distinguished the type of bus: address bus, data bus and control bus. With the development of the PC computers, one extended the denomination drunk to all the internal and sometimes external connectors connected to the microprocessor system (including with its circuits of interfacing) allowing to insert computers additionnal boards (graphics accelerator, serial, parallel, SCSI, input / output, USB, firewire, network...).

An internal bus is a connector making it possible to insert peripheral electronic boards. We will meet them mainly at the time of practical work. Each bus (connector) is standardized in:

Bus ISA appeared with first computer PC XT from IBM in 1981. At the time, the number of bits of data was of 8 bits (like the external data bus processor) with a frequency of 4,77 MHz. With the 286, IBM left the same one, but the characteristics change since the bus passes in version 16 bits (data bus) with a speed of 8 MHz. This speed is always that used currently, the band-width of a bus ISA 16 bits is 16 MB/seconds. A 8 bits board can be fit in a bus ISA 16 bits. At the end of 1999, only some modem, of the boards of add parallel port or series... still use this type of connector.

The current motherboards do not include any more a bus ISA, replaced by the more fast bus PCI, Plug&Play, and newer PCI-Express.

MCA Bus appeared with the PC 386 of IBM. This one had not envisaged any patents at the time of the exit of the XT and the concurrent firms used their technical data. With the introduction of the 386, IBM established a new bus of 32 bits of data. Its maximum capacity is of 40 MB/S. As IBM had patented the whole of the standards mechanical and electric, only this firm really used. 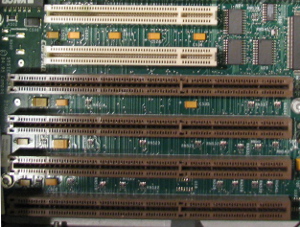 From the 486DX2-66 bus VLB or VESA Local bus appeared. This one comprised maximum 3 connectors, adds on a bus ISA 16 bits. Connected directly on the processor and directly taking again the signals, this one could only disappear with the 486. Attention, to install 3 VLB boards generally poses problems. Bus VLB was declined in two versions: A and B. B was connected to the processor via a circuit of interface more advanced than a simple buffer. The performances are identical.

With the first PENTIUM based-computer, the bus of extension became clearly a neck with its speed limited to 8 MHz on a data bus of 16 bits. This explains the exit of a completely new bus given rhythm to 33 MHz over a width of 32 bits (that is to say 4 byte - byte), PCI bus. This one was at the beginning used by the graphics accelerator, but the modem, sound board, boards networks... use this bus with the detriment of obsolete bus ISA. Its band-width is 132 MB/s, that is to say 78 times higher than that of bus ISA.

PCI board can be fed in 5 V (in the beginning) or in 3,3 V. The supply voltage is regulated directly at the time of the starting of the computer. The boards functioning in 3.3 V have 2 notches. This does not pose problems in this direction. On the other hand, some slots of motherboards do not accept the boards 5 V, only 3,3V. In this case, the connector of the motherboard includes the 2 notches, you cannot insert a board 5V. In the same way, some old motherboards (Pentium) accept the boards 5V but do not detect the boards 3,3V correctly. Generally, that occurs nevertheless without problems.

PCI bus has the characteristic to allow a peripheral connected on this bus to take control and to transfer directly from the data towards another peripheral PCI, the main memory or even towards bus AGP. This is called the DMA (Direct Memory Access). This last possibility is sometimes limited by the circuit of interface (chipset).

The diagrams of a system with bus PCI (this bus is not limited to the PC, also in Mac) below brings some interesting information. The function represented between the processor and the bus is what we will call the chipset. It manages bus PCI and the memory. The others bus are related to bus PCI by a circuit which is used as bridge. All the current transactions between bus ISA and the processor pass by the processor. 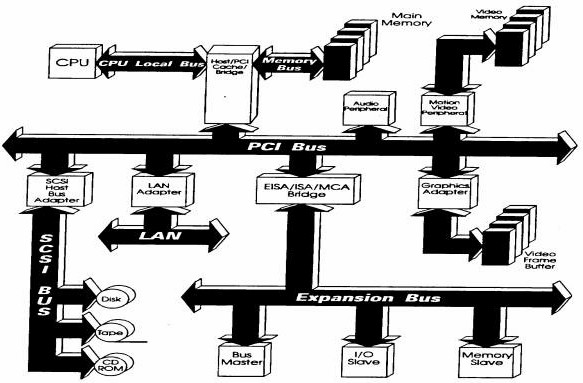 From the design of the connector, PCI-X 32 bits boards can be inserted in 1 bus 64 bits. PCI-X bus are directly connected on Southbridge of the chipset, which requires specifics mother boards (chipset).

In spite of its progress, PCI bus quickly became too slow for the graphic boars. INTEL developed bus AGP especially for those. The speed of this bus is of 66 MHz in all the versions. It is able by DMA (direct Memory Access) to take the control of the memory for the direct transfer of information. This characteristic is also established in bus PCI. The specifications of INTEL propose 3 operating modes:

AGP 2X: this one makes it possible to charge information 1 time on the rising part of the clock, once on the downward part (doubly of the flow, 533 MB/s) on a base frequency of 66 MHz. Voltage of the signals on the bus: 1,5 V This bus are to manage by the circuits of interface INTEL 440 LX, EX, ZX and BX.

AGP 4X uses the same bus but to 133 MHz that his predecessors, as in AGP 4X, one duplicates information charged on the sides rising and downward with the clock. This type of bus implies that the read-write memory is sufficiently fast. There is a higher specification, extension of the AGP 4X, called AGP Pro which is intended for the future workstations. Specificity is related to the power supply of the board (50W for the AGP Pro 50 and 110 W for the AGP 110 against 25 W for the AGP 4X). The rate of transfer reaches 1,07 GB/s with a supply voltage of the board of 1,5 V.

Really left at the beginning of 2003,the AGP 8X remains in 32 bits but to 266 MHz. Only real advanced, the transfer reached in theory up to 2,13 GB/S. In practice, the profit of performance is lower than 5% compared to the AGP 4X. The AGP is able to detect the operating mode AGP of the graphics card. The voltage of the signals of the graphics accelerator passes to 0,8V. This weak voltage explains why a motherboard managing the AGP 8X can accept boards AGP 2X and 4X, but not a graphics card AGP 1X of the first generation.

By comparison, first computers bus ISA made only 16 MB/s and bus PCI 132 MB/s

PCMCIA bus (Personal Computer Memory Card International Association) is used in a notebook like drank intern. Some boards for office automation PC make it possible to insert such boards in the PC. This is anti- used in particular for personal "credit cards" of recognition hacking.

Exist 3 versions PCMCIA I, II and III. 2 connectors PCMCIA I give a PCMCIA II, and 2 connector II superimposed can also give a bus PCMCIA III for hard disks for example. The internal connector is thus the same one, the only difference comes from the height available to insert the peripheral. A site PCMCIA II replaces 2 PCMCIA I. A portable comprising a slot PCMCIA II will integrate automatically 2 slots PCMCIA I One finds under this format of the modems, boards networks, flash memories... Boards PCMCIA can be integrated "hot", under voltage thanks to very particular some care of the mechanics of the bus. Indeed, the terminals of power are initially connected at the time of the insertion of the board, then the near total of the signals and to finish 2 pins intended for the detection of insertion.

The PCMCIA I is reserved only for the use of memory board in the notebook. Type II, thicker of 1 mm, authorizes more choice: board networks, modem... The PCMCIA III which should be effective beginning 2000 will authorize the use of hard disks of 1,8 inches.

The board (metal case or plastic) is equipped with a connector (socket contacts). The receptacle is interdependent of the case of the system. The end of this one is equipped with a socket (pin contacts). The connector and the socket comprise 2 lines of 34 contacts separated by 1 mm. The pins of the receptacle present 3 different lengths the boards are supplied by 2 pins Vcc of 5 V, 2 Vpp pins of 12 V and 4 pins of mass. These pins are inserted before the other pins to avoid voltages on the buses at the time of the insertion or afterwards at the time of the removal of the board. 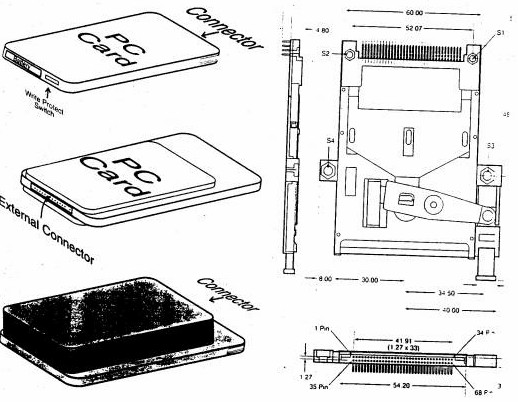 Certain current boards function in 3,3V in the release 2.0. In this case, the portable reads an internal storage with the board before supplying the pins of the board and transforms 5 V into 3.3 V then supplies the various pins of the board. 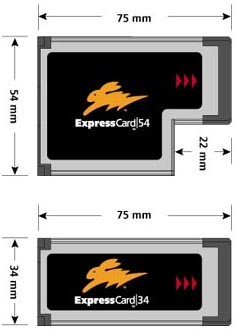 Developed from 2004, the ExpressCard replaces PCMCIA. One connector is developed. On the other hand, two-dimensional maps are used (width of 34 or 54 mm) with a length of 75 mm and 5 mm thick.It is a transmission of type series with two-speed transfer following the inserted card. In the first type of operation, the ExpressCard is based on a channel of a PCI-Express 1.0 bus. This allows transmissions up to 250 MB/s in Full duplex. In the second, the transmission uses a bus type USB 2.0 (including its three modes of operation at 180 KB/s, 1.5 MB/s and 60 MB/s). 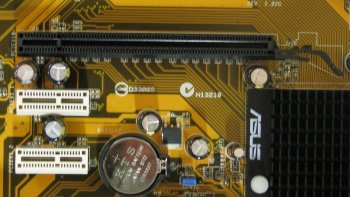 The band-widths of the current buses become too weak for the processors. Even the AGP 8X dedicated to the graphics accelerators with a band-width (very theoretical) of 2,3 GB/s remains limited. Under the impulse of INTEL, the substitute of buses PCI and AGP is the PCI-Express train. It is planned for the beginning of 2004 and should at the beginning accept the graphics accelerator, possibly a board network high speed.

This new bus is of series type should allow flows (theoretical) going up to 8 GB/s. With this band-width, it should replace bus AGP shortly. The connector does not have a fixed size since it is composed according to its size of 1, 2, 4, 8, 16 or 32 ways. Inevitably, the band-width increases proportionally.

A way is made up of 2 pairs of connection, for the transmission, for the reception of the data. Each pair ensures an one-way flow of 250 MB/s in emission or reception. By coupling 32 transportation routes, one thus obtains 8 GB/s.

Contrary to the others bus used in computer PC, it is connected directly on the northbridge chipset (the component which manages the transactions between the processor and the memory), which ensures a better connection with the memories of the PC.

Like all serial bus, the control of the data is directly assured by the controller. Contrary to the others drunk used in the office automation PC (not the servers networks), the boards are hot plug.

A version for portable computer is envisaged, called minis PCI Express train. Dimension 3 cm broad is (for 8,5 cm in the case of a bus PCMCIA)

Its competitor at AMD names hypertransport. It accepts a theoretical flow going up to 6,4 GB/s. It is currently established in chipsets AMD for microprocessor 64 bits as inter - bridge but could also be used as drank intern (some manufacturers are interested). We already spoke about it in the chapter on the processors.

A last remark, the PCI-express is an internal bus, it replaces neither serial ATA for the hard disks nor the external wearing of communication like the USB or IEEE 1394 Firewire

8. Calculate the band-width of a microprocessor bus.

The calculation of the maximum transfer rate of a bus is calculated by the following formula:

Competences with the service of quality in processing.